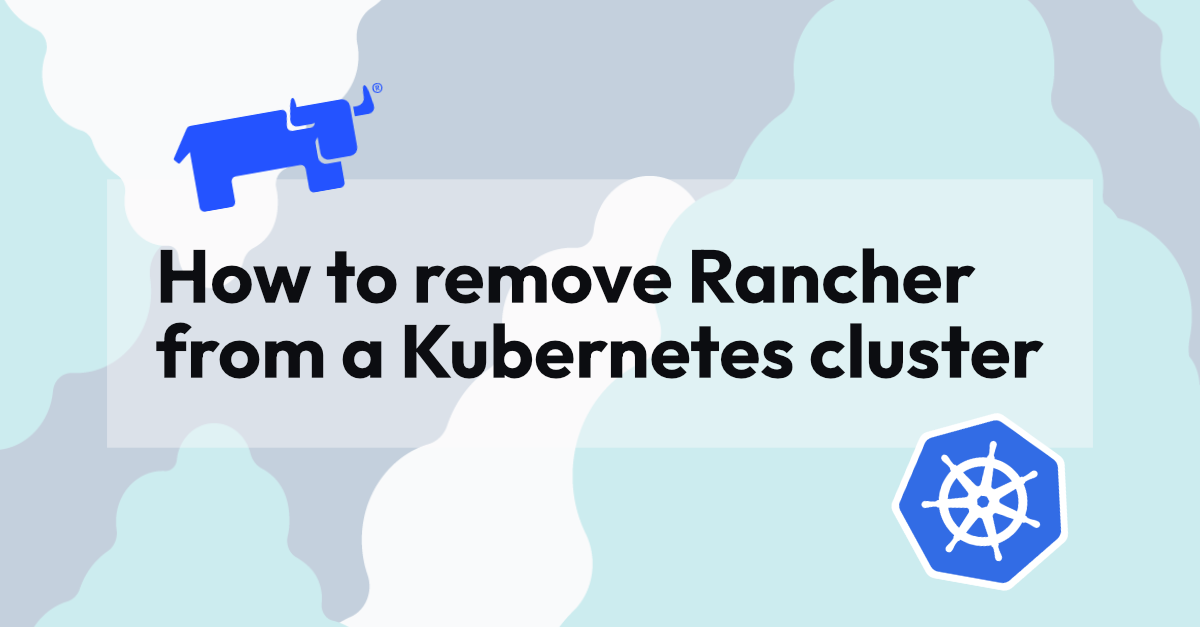 How to remove Rancher from a Kubernetes cluster

Rancher is a platform for managing Kubernetes clusters and workloads. This short post covers a recent experience trying to remove Rancher from a cluster. This approach can be used to either remove Rancher itself, or for cleaning up a cluster that was imported into Rancher.

Rancher is a platform for managing Kubernetes clusters and workloads. This short post covers a recent experience trying to remove Rancher from a cluster and will hopefully help others in a similar situation. This approach can be used to either remove Rancher itself, or for cleaning up a cluster that was imported into Rancher.

Removing Rancher (according to docs)

There’s a section under the FAQ part of the Rancher docs that provides a very short version of how to remove Rancher.

It’s worth noting that simply deleting the Helm release (or Kubernetes manifests) is not sufficient for removing Rancher, as Rancher creates a whole bunch of Custom Resource Definitions (CRDs), instances of those CRDs and multiple namespaces. These DO NOT get removed when deleting the Rancher Helm release.

So, there’s a System Tools available on GitHub which is supposed to clean up the leftovers from Rancher. However, at the time of writing, the CI pipeline on master branch is broken and the last commit was on 15th April 2019… So my confidence in this tool was not off to a great start.

The actual command you want to run is:

Apparently that’s all ok because I’ve had this utility work and successfully clean my cluster. However, this command has failed, and has left a whole bunch of resources in a Terminating state because of finalizers that referred to resource types that no longer existed…

If the system-tools remove sub-command completed but you have a bunch of namespaces and resources in the Terminating status, you might get a bit disappointed and now want to go through each of these manually to find that they are not being deleted because of finalizers. In my case, the finalizers that they referred to were Custom Resource Definitions that either never existed, or were somehow deleted and no longer existed (I never found out the truth…). Regardless, the finalizer will prevent the resources from being deleted. So let’s find out the left over resource types and instances of those, and then how to remove the finalizers that are blocking the delete from happening.

To list any resource types left over by Rancher, I ran:

I found that all resource types created by Rancher had the suffix cattle.io.

To list resource instances left over by Rancher, I ran:

In my case, there were only two unique subdomains of finalizers that were causing issues:

Neither controller.cattle.io or wrangler.cattle.io existed as resource types (nor any sub-types), and these finalizers were attached to many resources in multiple namespaces, and also some cluster-level resources.

To remove these, I wrote a simple bash script (I did not find a clean way of making a kubectl one-liner with the fully-resolved resource type name… And I did not particularly enjoy doing this, so I made a bash script).

Note: I have added the --dry-run=client argument to the kubectl patch command just in case someone copy+pastes this to avoid any harm. To actually do something, remove the --dry-run argument altogether.

I also had some of these finalizers on namespaces, but I did not find a clean way to automatically identify which namespaces were created by Rancher.

Once these finalizers are removed, the Kubernetes control plane was able to successfully finish the cleanup and remove any trace that Rancher had ever existed. So I guess the system-tools kinda did work, just with a gentle nudge.

Only removing the faulty finalizers

As a general practice, removing finalizers is a bad idea. They are often there for a reason, but when they refer to resource types that no longer exist, I think we can remove them. However, we don’t want to remove ALL the finalizers from a resource; only those which we can consider faulty.

If you want to test the jq query here is the nested kubectl command that pipes the JSON output to jq.

Check that this only removes the finalizers you want to remove.

Rancher can be a pain to remove because it creates so many CRDs, resources and namespaces in your cluster at runtime. This means your deployment tool has no record of those resources being created and cannot clean them up for you. Hopefully for you, the system-tools remove subcommand will work and purge your cluster of Rancher, but if not, I hope this post has given you some tips for removing Rancher. Personally, I spent too much time doing this and that’s why I decided to write this post :)

If you have any questions, feedback or want help with managing Kubernetes please leave us a comment or get in touch here!

How to automate HashiCorp Vault OSS backups in AWS EKS

In this post we will walk through an implementation using a Kubernetes CronJob to take daily snapshots and store them in an AWS S3 bucket for safe keeping.

In this blog we'll look at how to assume an AWS IAM role from a Service Account that exists within an AWS Elastic Kubernetes Service (EKS) cluster. All provisioned with Terraform.